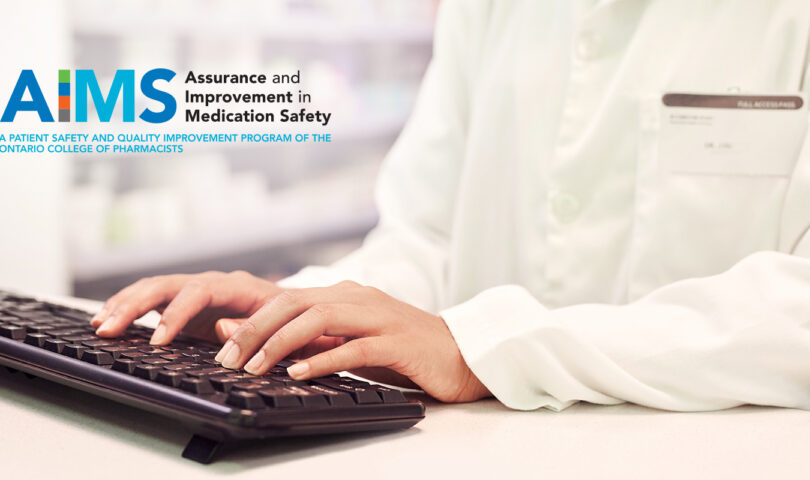 More than half of community pharmacies have onboarded to the Assurance and Improvement in Medication Safety (AIMS) Program and are using the incident-recording platform to anonymously record valuable data, including those related to near misses, which will help identify trends and support shared learning to improve patient safety.

Near misses – events that could have led to inappropriate medication use or patient harm but did not reach the patient – provide valuable insight into areas of risk and may indicate where systems can be improved to prevent patient harm. The recording of near misses through the incident-recording platform administered by program partner Pharmapod is a critical component of the AIMS Program.

Consider the recording of a medication incident as a retrospective analysis meant to minimize the risk of a recurring situation. A near miss provides an opportunity for a proactive review of workflow processes to identify areas of risk as well as procedures that can be enhanced to minimize the recurrence of future incidents. Essentially, the shared learnings from near misses recorded by one pharmacy may be used by another to prevent an error from reaching the patient.

Based on the experience of community pharmacies with the AIMS Program to date, the College recognizes that there is an opportunity to further educate pharmacy professionals and reinforce expectations regarding near misses. The following scenarios of near misses are intended to support the ongoing learning of pharmacy professionals who all play a vital role in building a safer pharmacy system in the province through continuous quality improvement.

Background: A patient with moderate depression visits his healthcare provider and is prescribed Paxil 20mg®. He takes the prescription to his local pharmacy where a member of the pharmacy team misinterprets the drug name as Pariet® 20mg. This is not an isolated incident as the drug names have been confused before during previous intakes. Other members of the pharmacy team have caught the errors either during the technical check process or the therapeutic check.

Situation: When the patient picks up his prescription, the pharmacist discusses the medication with him and confirms that he was diagnosed with depression. Recognizing that Pariet is not the appropriate therapy, the pharmacist examines the original prescription, makes the necessary corrections and dispenses Paxil 20mg.

Decision to Record: This near miss is a recurring situation and requires a preventative process change. If this potential incident hadn’t been detected, the patient would not have received the correct medication.

Outcome: The pharmacy team identified several areas of opportunity which led to process changes. Workflow was changed so that, when possible, assistants, pharmacy technicians and pharmacists now collect the indication for therapy when the patient or caregiver presents the prescription and prior to computer entry. The indication is then recorded (on the prescription and in the appropriate place in the patient record. ) so that it can be reviewed by the pharmacist when conducting the therapeutic check.

Background: An opioid-dependent patient is admitted to a drug-treatment program where he is prescribed 5mg methadone. Several days into treatment, he takes a new prescription for 9mg methadone to his pharmacy. It is incorrectly entered as 90mg.

Situation: The dose is prepared, confirmed for technical accuracy by a pharmacy technician and therapeutic appropriateness by the pharmacist. At the time of the final patient assessment, the pharmacist confirms the expected dose prior to ingestion. The close call is discovered and a serious medication incident averted.

Decision to Record: Incomplete technical and therapeutic checks took place which would have resulted in the patient receiving 10 times the prescribed dose of methadone. It is important to determine how processes can be improved to avoid recurrence of similar scenarios.

Outcome: The pharmacy team identified several areas of opportunity which led to process changes. These included actions to be taken prior to dose preparation including:

Background: Following dental surgery, a patient is prescribed Amoxicillin 500mg and takes the prescription to a community pharmacy. The pharmacy assistant gathers the usual information, including possible allergies to medications.

The patient indicates he is severely allergic to penicillin. The pharmacy assistant enters into the patient profile that he was allergic to “Pen”. A few minutes later, after assisting another patient, the pharmacy assistant enters the prescription into the computer and fails to identify that Amoxicillin would be contraindicated for a patient who is severely allergic to penicillin; the contraindication is not detected because the computer alert system does not recognize “Pen” as penicillin

Situation: Amoxicillin is prepared and the pharmacist checking the prescription fails to notice “Pen” listed as an allergy on the patient’s profile. While counselling the patient, the pharmacist tells the patient: “This is amoxicillin, a penicillin type antibiotic.” The patient expresses her frustration that, despite reaffirming her severe allergy to the dental office and the pharmacy, she was still given penicillin.

Decision to Record: The use of an abbreviated form for penicillin prevented the pharmacy’s computer system from detecting the contraindication. Inputting short forms or incorrect spellings can hinder the software’s ability to identify other drug-related problems such as the dispensing of an incorrect dose, inappropriate change to drug therapy and potential drug interactions.

Outcome: Following a discussion, pharmacy staff committed to selecting the specific drug allergen from the computer list rather than entering the information free form.

Although near misses are events that do not reach the patient, learnings from these experiences may be used to prevent medication incidents and their resultant patient harms. Within a safety culture, near misses are critical shared learning opportunities that benefit the entire pharmacy system. The work of the College’s medication safety Response Team, which was referenced in the last issue of Pharmacy Connection, will include an analysis of reported near misses along with medication incidents and recommendations for the entire system on how they can be prevented.

As you consider these scenarios, you are encouraged to utilize professional judgment to determine whether a near miss provides a solid learning opportunity to improve existing pharmacy processes and procedures. A subsequent discussion among pharmacy staff can enhance best practices in workflow processes to increase patient safety.