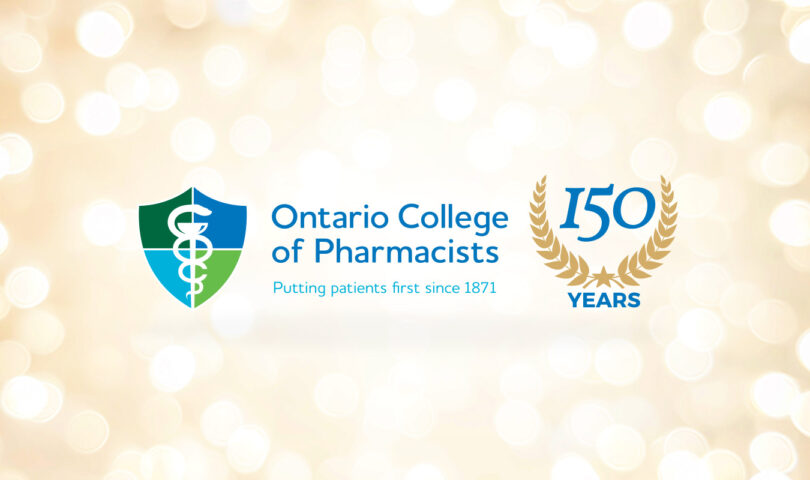 This year marks the College’s 150th anniversary, and in celebration of this milestone, this article in Pharmacy Connection highlights some key milestones and initiatives for the College and the pharmacy profession over recent decades.

We asked past and present Registrars William Wensley (1967 to 1990), Jim Dunsdon (1991 to 2000), Deanna Williams (2000 to 2011), Marshall Moleschi (2011 to 2016) and Nancy Lum-Wilson (2017 to present) for their thoughts on some meaningful OCP achievements and milestones during their tenure. Their views provide an opportunity to reflect on the College’s work and mandate to serve and protect the public over the last 150 years.

“I’m proud of the College’s and the profession’s work in pursuing patient-oriented practice and continuing education leading up to improving and ensuring levels of competence. This work is an ongoing and integral part of College activities.“

“Leading the College and the profession’s transition to regulation under the new Regulated Health Professions Act, 1991, while also overseeing a massive construction project to double the square footage of the College, were significant initiatives! The College also assumed a leading role in the development of Pharmacy’s first Mutual Recognition Agreement (MRA) which was signed by NAPRA member Colleges in spring, 2000.“

“I am most proud that the Ontario College of Pharmacists gained an international reputation, and recognition, as a leader in professional and occupational regulation, through the following initiatives: OCP’s cutting edge QA program, its bold communication and public outreach efforts, its move from a traditional workplace to a telecommuting platform, and in being the first pharmacy regulator worldwide to formally regulate Pharmacy Technicians as an independent and separate class of registered pharmacy professionals.“

“Over the five years that I had the privilege to serve as registrar of the Ontario College of Pharmacists I saw many significant changes to the profession of pharmacy and the College. While all these changes are significant, the most important changes are not just the changes that focus on ‘what’ one does. The most changes focus ‘how’ one does what they do. I feel the most important change was the development of the Code of Ethics and its tools that dictate a healthcare professional’s ethical duty to patients and society. The Declaration to: put patients first,’ do good,’ do no harm,’ protect patients,’ take ‘responsibility and accountability,’ with ‘integrity and honour.’“

“I think the greatest achievement is the transformation that is currently underway. We are transforming the College into a data-driven and evidence informed organization, using data to better understand our work and the impact that the profession, and we, as a regulator, have on the healthcare system.“

A Collaborative Effort to Protect and Serve Patients

While a great deal has changed in the pharmacy profession since 1871, one constant has remained  our focus on putting patients first.

Until 1953, the College was both the regulating body for the profession and had responsibility for the education and training of generations of Ontario pharmacists, laying the foundation for the evolution of the profession in the second half of the 20th century and beyond. When the College transferred its teaching functions to the University of Toronto’s Faculty of Pharmacy, it focused its mandate on serving and protecting the public and holding Ontario’s pharmacists, and eventually pharmacy technicians, accountable to the established legislation, standards of practice, code of ethics and policies and guidelines relevant to pharmacy practice. Part of that role includes ensuring that community and hospital pharmacies within the province meet certain standards for operation and are accredited by the College.

This work would not be possible with the dedication and commitment of College staff, leadership, Board and Committee members, government and other stakeholders within the broader healthcare system who have helped develop a regulatory framework here in Ontario that is respected around the world. And, of course, a special thanks is extended to all of the pharmacists and pharmacy technicians who continue to contribute to safe and quality patient care and engage with the College to advance our public interest mandate.

We look forward to ongoing engagement with all of these groups as the College looks forward to embracing exciting new opportunities to promote quality and safety and to continuing to put patients first, together.

The College would like to thank the former Registrars who generously provided their input for this piece, as well as Diana Spizzirri and Deanna Yee for their assistance in preparing this article.